I was told by a friend who knows about these things never to say “third world country” ever again. Mmm. OK València Estaciòn de Bus is like a place from another age. The WC arrangement is certainly less attractive than a B&Q 1967 Orange Bucket, and there are more pigeons eating at the cafeteria tables than “customers” (as UK Rail Services insist on saying).

I’m off on jaunt part three after Jaunt 2 found me having 4 days of super sun (lovely beaches and it’s hat hat hat for me - I bought two) in Valencia …. Gorgeous vibe to the old town where I was accommodated in yet another “Design Hotel”, this time a rather special minimalist number with designer staff with designer haircuts: think Hannah Waddingham in Ted Lasso, and the food drink umpteen beautiful squares with weekend shows plus markets cathedrals museums and astonishing modern design (The city of Sciences) made me rather annoyed I’ve missed out on this incredible city. Only real chat was with Hugo who owned a bar that “sometimes gets busy after 11pm”. As a rather wrecked old trooper, I think I’ve trooped my final post midnight troop. Speaking of which, The Colour was well and truly Trooped back in Blighty so Gawd Bless Yer Maj. That’s my jubilee done.

Doesn’t facial hair grow quickly? No not you Brenda, but I thought I’d get away with nary a shave on this trip Santa Clausing myself after a fortnight. Nope. Hunting for razors and gel, I found some in a bakery! An empañadilla con lomo y dos Gillettos Plasticos por favor. Gotta love these Valencians. Has to also be noted that there’s a lot of Spanish about. There’s Castilian (Madrid bog standard) Catalan (Barcelona etc) there’s Galician totally different plus it appears all bus stops here are in “Valencian” which has lots of single “i” everywhere. I thought I’d be fine with una cerveza y un boccadillo de Ramon y Queasy. Not so. Nada enough.

SO it’s Olé to BARCELONA by snazzibus con aircon con wifi thence Sitges (formerly Sea Chairs, because of the view and pronunciation) and five days of catching up with amigos and bars, with the odd Sagrada Familia cathedral thrown in as it’s NEARLY finished! I first visited it with some Spanish lady friends back in 1983!

As a waft emanates from the Aseos Servicios or Lavabos (all words for “khazi” “restroom” “lavatory” or “”bog”), I’ve a bus to catch. 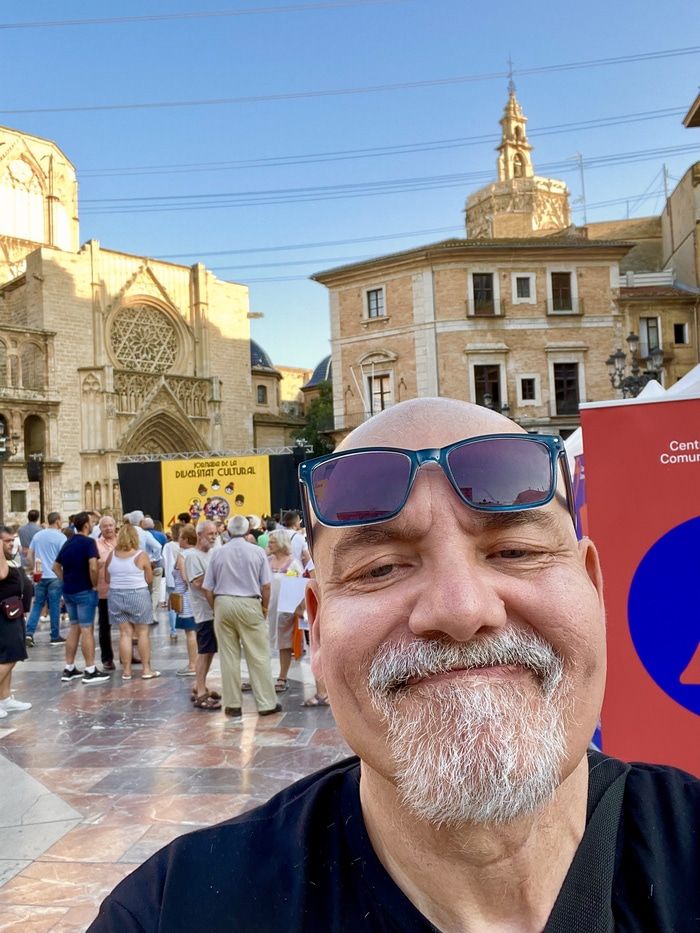 “Underwear, soiled on one tray, iPads and adaptors, post 1947, another tray, Post Modernist Impressionist Art, that bin over there, everything else wrapped up in an old beach towel covered in 6 month old Factor 40, follow me please!” So... Continue →