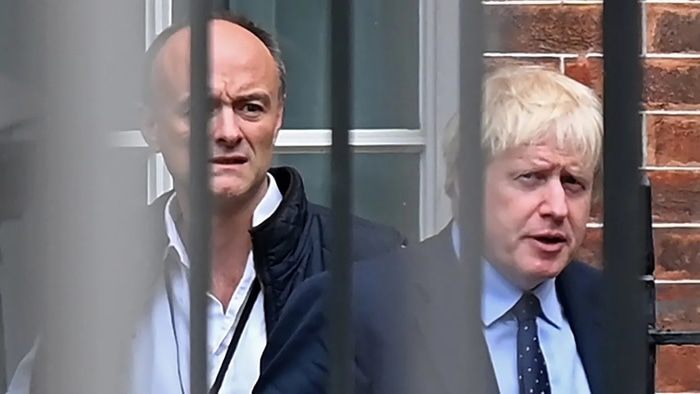 My take: Will this resignation end the longest period of dishonesty in British Politics, instigated by Dominic Cummings’ three hedge fund billionaires in a plot to install a puppet government in the UK run by a puppet, (purely to reinstate massive deregulation of rich people’s profits and businesses)?

Politics will take a long time to revert to a return to Truth and Fairness. Methinks. The “cabinet” which remains is stacked full of appalling embarrassment and stupidity. God help us, and who by the way, has ever LISTENED to people like Braverman (Suella) Dorries (Nadine) and Patel (Priti The Wicked)? Sheer horror. Ignorance, cruelty and nonsense.

The MPs now calling for Johnson’s departure include many of the despicable Brexit Liars like Steve Baker, Michael Gove and Andrew Brigden, plus the sycophants Zahawi, Truss, Sunak, Raab, Javid, Ludicrous Rees-Mogg, and many others. These are the current heart of the Tory Top Ranks. Covid was dealt with appallingly at the start with vast numbers of deaths which many Health chiefs said could have been avoided. Early deals were done to get vaccines purchased to dig the Government out of a potentially fatal hole. Many dodgy businesses importing then selling faulty PPE were allowed to run riot earning more millions for friends of Tories.

From my position as a gentle champagne Socialist (sure, I admit it, but card carrying member for nearly 50 years), the essence of fair play, fun, genius in Arts and Sciences and wacky eccentricity had left us all being replaced by excessive selfishness, greed and hate. That’s what Brexit “getting done” HAS PRODUCED. Look at the Northern Ireland disaster, look at the cost of living crisis and look at the folks raking in their filthy dishonest lucre.

Today I’ve listened to a perfectly reasonable honourable Tory (currently not an MP) Rory Stewart, a former reasonable Tory MP Lord (Michael) Heseltine and an OK Tory Steve Brine. There are decent people who have different fundamental views about Politics, people with morality and honesty. In the USA the extreme greedy idiotic side of the Republican Party won and look what happened? Greed, dishonesty and appointments of Supreme Court Judges changing the rights of Women and doing grim things. In the UK we have ended up post Brexit with a society where Healthcare Staff have left in their thousands, Privatised Companies (Utilities/Transport) have continued to make massive profits, Bankers’ and Financial Institutions’ Bosses are pocketing the biggest bonuses ever and this government’s agendas regarding media privatisation and squeezing the BBC bear no credible rationale amongst a slew of policies leading to a more right wing and controlling rulership.

Brexit is really what everything is about. We should have stayed and slowly changed from within. Anyone reading this who is still Pro Brexit is most welcome to civilly debate with me its advantages in 2022.

Whatever happens now, the damage inflicted on our Society will be long lasting….a credible Opposition Cabinet exists with in my opinion some genuine intelligent caring and thoughtful Women and Men. If they do not imminently come to power, a rapid change and effective new Tory Leadership is vital to save our soul and sanity as a Country. I’ll be willing to listen to anyone who doesn’t appear corrupt.

3000 metres in minutes. No, not part of a recent marathon attempt, but the rate the A350 airbus starts to drop at from 33000 feet (mixing imperial and metric the fault of BA graphics bods I’m afraid). Yes Betwixt is back travelling and... Continue →